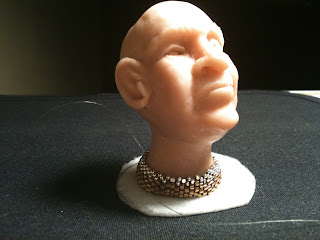 October 4, 2010
I have this vision of a head covered in seed beads but how to accomplish this I'm not sure.  I start by gluing the head to a piece of fast2fuse embroidery material with the intention embroidering around the base then sewing up the neck in peyote stitch.
When I get to the more narrow part of the neck I have to switch to a different size bead in order to cinch it in to fit.  The only smaller bead I have with me is a silver #13 Charlotte so I switch to that.
It appears to work...but what do I do when the neck thickens and I must compensate for that width? 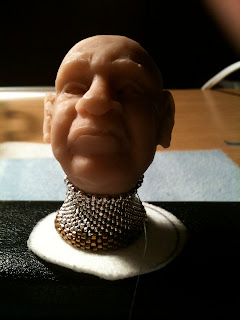 October 7, 2010
I decide to switch to Right-Angle-Weave stitch which enlarges the footprint without increasing the peyote.  I like the combination but what will happen when the beads begin to creep up the sides of his face and head?  And, what do I do with the area under the chin?
October 8, 2010
I decide to add on in right-angle-weave little links below his chin then fold them under as I work my way up the back of the head.  Have you ever seen such gigantic ears? 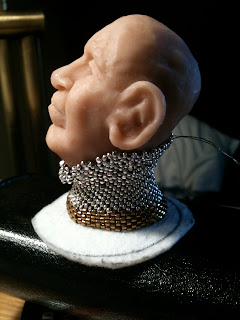 Just got a new camera..Cannon G11.  Amazing macro capability...such clarity!
I'm moving up the back of the head in right-angle-weave; time to move to the front of the head...not sure how to do it.  I've decided to go half-way toward the center then go back the other way going in a semi-circle up and over the forehead and down to a point at the top of the bridge of the nose.  I have no idea if this will work but I'm determined to JUST DO IT and share my success OR failure!  TBC 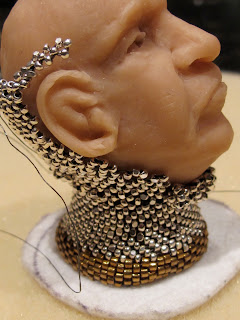 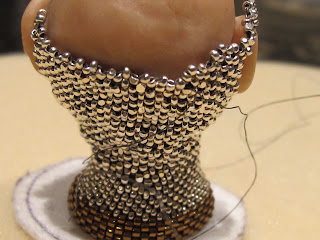