Sometimes things just don't turn out the way we expect. For example, I had this idea of creating a self-portrait out of low-fire clay - a different medium than polymer. I traveled several times to Guemes Island (an hour and a half from Seattle) where I worked with clay and metal sculpture artist Sue Roberts - http://suerobertssculpture.com to create a life-size clay head of myself. I was thrilled with the outcome. I had given myself the cheekbones I had always wanted and my neck looked fabulous. Here's what it looked like: 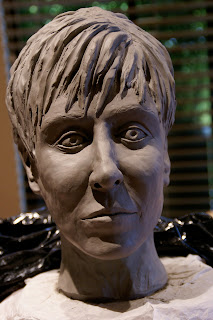 It had to be fired in a kiln; sometimes a difficult process. I was excited to see how it would look. Sue opened the kiln and this is what I saw. 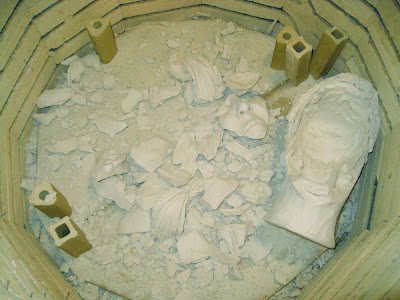 Obviously, I must have overdone the cheekbones and neck OR was it the hair?  Something made it blow in the kiln.  I have to admit, I was not disappointed. Well... that's not entirely true. Part of me wished I could have painted it if only to see how I'd look with the enhanced cheekbones and neck!

But the other part of me was perhaps even more intrigued with the broken pieces. It stimulated my imagination to see all of those parts of my head scattered all over the bottom of the kiln; sort of made me feel like I had found myself in an archeological dig.  Symbolically, it was the perfect way to break out of my 5th decade and into my 6th.  The pieces providing so many more opportunities - so many more possibilities! 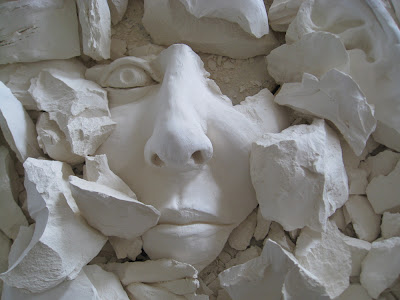 Tomorrow marks the end of this year-long project.  365 days of making one head a day, naming it and listening to what it has to say.  I didn't really know exactly what I was going to do when I started the blog.  In fact, I didn't decide to do it until one week before when I happened to take a free-form beading workshop from Tina Koyama - a talented artist/writer -  http://www.tinakoyama.com/ It was Tina who gave me the idea of creating one head a day.  She had just completed her own year-long, one free-form piece a day, project.
My experience in polymer clay was limited.  A few months prior to my workshop with Tina, I had become intrigued by a book I found on Amazon called Ancient Modern; Polymer Clay + Wire Jewelry.  Imagine my delight when I discovered that the author, Ronna Sarvas Weltman http://www.ronnaroud.com/ was local and offering a workshop in polymer.
I loved her workshop but became more fascinated with the idea of creating clay heads and faces than making the beautiful jewelry Ronna designed.  Ronna didn't make clay heads but with excitement and enthusiasm she encouraged me to do so.  She would peruse the internet in the middle of the night and by morning I'd have a list of 'how-to' links and the websites of other clay-head artists in my mailbox!
So why make the commitment to create one clay head a day for a year?   One, it would help me to build my skill in creating faces and two, it would be an amazing experiment in the creative process.  I purposely didn't plan exactly what I would do other than to make the head and do some form of writing (about what I was not sure).
As a result, I was as much surprised by the outcome as those of you who followed the blog.  Life presented some pretty big obstacles along the way including the illness and death of my Mother in July.  But instead of stopping me, I found myself more grounded and connected to the process.  The emotional trauma translated into a deepening of creativity. The practiced meditation of creating something everyday seemed to bring me a since of peace instead of stress.  For the first time in my life I had incorporated a practice that actually fed me instead of draining me and in doing so, I had uncovered a gift that would last me a life-time.  Like learning to ride a bike, I would forever know how to push the judging and thinking aside and become one with the source that fed me.
Many of you have asked about my process so here are a few answers to those questions....
1.  The beginning of each month I would determined the color scheme
2.  Mix the clay and have 30-31 pieces ready to go
3.  Make one head (sometimes a few more), bake them, photograph them and upload them to the blog.
4.  Working on one image at a time I would name them, then listen to what they had to say. It was very interesting how the angle of the photograph influenced the name and the intention of the head.  At one point, I realized that the same head, photographed from several angles could have many different names and intentions.  (However enticing I didn't pursue this)!
5.  In the beginning, they actually spoke (kind of like a monologue) and I responded with my "reflection."
6.  As the dialogue became less wordy, I noticed that my reflection contained a "message."  I began containing the message in italics.
7.  On Valentines Day, I made a heart-shaped head and wrote a poem.  From that day on, I simply named the head and wrote the message; taking out the monologue and my reflection.   I missed writing the monologues but when I tried to re-incorporate them it didn't feel right so I stuck to the new format.
8.  I wanted the final head to be different so I decided to do a self-portrait in low-fire clay.  Working in this new medium AND with a life-size head was like jumping on an Arabian race hoarse after I'd been climbing a mountain on a mule.  Don't get me wrong, I LOVED the mule - it had become my trust worthy friend.  But isn't this what I was trying to accomplish?  Try something new...dare to fail...find the creative spark in spite of the lack of skill?
9.  And then the greatest gift I could imagine....the head blows up in the kiln and provides me with pieces I couldn't have come up with if I had tried.  Lesson?  Sometimes the best creative endeavor comes from what we consider a failed mission.
10.  One of the most frequently asked questions...."WHAT ARE YOU GOING TO DO WITH THE 365 HEADS?"


I intend on continuing to make heads and faces; incorporating them into my jewelry and creating pieces of art.   I plan on documenting the process from idea to finished product and hope you'll join me for the ride as I navigate this new journey and explore the possibilities!

Dear Suzi;
What a wonderful summary of your year and what you have accomplished. But....what are you blogging tomorrow?
To think you've done all this at such a difficult time in your life is unbelievable .....although I know you'll say that this project helped you get through the year; and...that's probably accurate.

God only knows what you will do next; that's one of the wonderful things about you. I can never quite predict what you will do, when you'll do it and .......how it will impact MY life.

You're a great "adventure" for me and I would not trade it for anything....or anyone.